A few years ago, my boss introduced a fascinating book to our small group – StrengthFinders 2.0. The general concept was that humans spend too much time trying to improve upon our weaknesses instead of sharpening our skills in areas where each individual has the most talent. My co-workers and I took an intensive, validated test and then waited for the magic computer to spew out our secret super powers. In order, my top 5 strengths (with commentary) were:

Restorative: People strong in the Restorative theme are adept at dealing with problems. They are good at figuring out what is wrong and resolving it. I still scratch my head at this one. Maybe they meant causing problems? I am the BOMB at that 🙂

Empathy: People in the Empathy theme can sense the feelings of other people by imagining themselves in others’ lives or others’ situations. I am a self-proclaimed Atticus Finch (pre-Watchman version)

Learner: People strong in the Learner theme have a great desire to learn and want to continuously improve. In particular, the process of learning, rather than the outcome, excites them. Remember that chick with bright notebooks at the beginning of each school semester? The one who was first to school because she couldn’t wait for the doors to open? Yep. That was me!

Relator: People who are strong in the Relator theme enjoy close relationships with others. They find deep satisfaction in working hard with friends to achieve a goal. No shocker here. Except, don’t make me do team activities, please. I just wanna hang in the corner with my best friend.

I had hoped for a few more interesting strengths like strategizer or intelligence or something really smart-sounding, but that never happened –even after testing twice. The goal of this test for our organization was to find a diverse set of people with different skills in order to cover all bases.

I hypothesized that these concepts might apply in a marriage as well.

While I didn’t talk hubby into taking the test, I easily postulated what his skills would be.

Grass Whisperer: He doesn’t use a lawn service or have a sprinkler system. I swear he simply walks onto the grass each season and chants magic growing incantations. He mows long after the first frost and complains that his grass is too plush and too abundant.

Circus Monkey Management: In his first career, Scott started as a cable TV tech, then moved to supervisor. Not long after that, he became a manager and then closed that chapter of his life by finishing as one of the top-ranked directors in the country. Now he’s a realtor without people management responsibilities, but that doesn’t mean he’s escaped the monkeys who need a little direction – he has a whole house full.

Flood and Risk Management: At the first threat of rain or a storm, you can bet that hubby has the generator ready, the sump pump primed, and escape routes planned. He doesn’t sleep on these nights, and I know it’s because he feels like it’s his job to keep us safe and dry and completely away from the flood that wrecked us several years ago.

Daddy Extraordinaire: I almost dropped extraordanaire simply because I couldn’t spell it right! But it’s the only word appropriate to describe. He does the hard stuff, and he’s so good at it. He knows when I’ve had a bad day and need a hug. He also knows when to go down to the basement and listen to whatever problem (football, girls, etc) has surfaced for the teenage man-cave dweller living in the basement. Same goes for the sweet girl who moved back home to go to nursing school.

Arranger: I grabbed this one from StrengthFinders 2.0: People strong in the Arranger theme can organize, but they also have a flexibility that complements this ability. They like to figure out how all of the pieces and resources can be arranged for maximum productivity. Need your dishwasher filled to maximum capacity? Scott is your man! Remember the egg photo from my recipe a few weeks ago? That was his work. He even has to make sure that the food is categorized within the shopping basket and on the conveyor belt when we check out–for maximum put-it-away efficiency. Want to see one of his favorite desserts?

Of his five strengths, you might guess which one causes conflict. For example, how do you suppose an arranger would react to something like this sitting on a counter top otherwise absent of clutter? 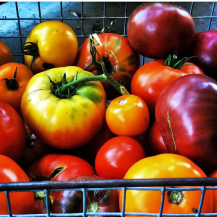 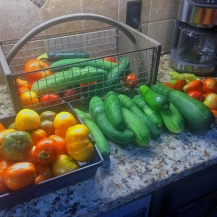 A “normal” person might relish in the accomplishment of fresh veggies from the garden to table to feed the family. Not an arranger. Poor Scott gets itchy when he sees something other than blank space on the cabinet. Our biggest tiff this summer?

What are you going to do with all of those stupid tomatoes we will never eat?

In March, I planted 24 seeds, placed them under grow lights and watched all 24 emerge like they were on plant steroids. Fast forward 4 weeks, and my basement was overrun by green. I moved everything out to the greenhouse in early April and counted the days until I could put those bad boys in the ground. Despite a minor mishap (hard frost, window open) I was able to save 13 of the original 24.

Normally, I’d give away all but six, but something snapped in me and I decided to keep all thirteen–I couldn’t bear to part with any of them.

“Really?” hubs said as he watched me dig a Baker’s dozen worth of holes.

“You are the only one who eats tomatoes in this family.”

Some couples fight over money, or discipline, or sex. Scott and I put on gloves and go to opposite corners when we talk produce.

He pointed at me, “You, little mama, are a vegetable hoarder.”

“I am not a vegetable hoarder!” and then stuffed a handful of purple beans in my pocket and scooped up tomatoes and peppers with my dress.

In stubborn, German fashion I ignored him and continue to nurture and fertilize all spring and summer. By the end of May, they had grown to mammoth sizes. For June and July, they produced pounds of tomatoes like they supplied a Heinz ketchup factory.

Our family took a vacation to Wyoming in early August and my biggest problem was not packing or finding phone chargers, but trying to figure out what to do with a bazillion tomatoes sitting on my kitchen counter. 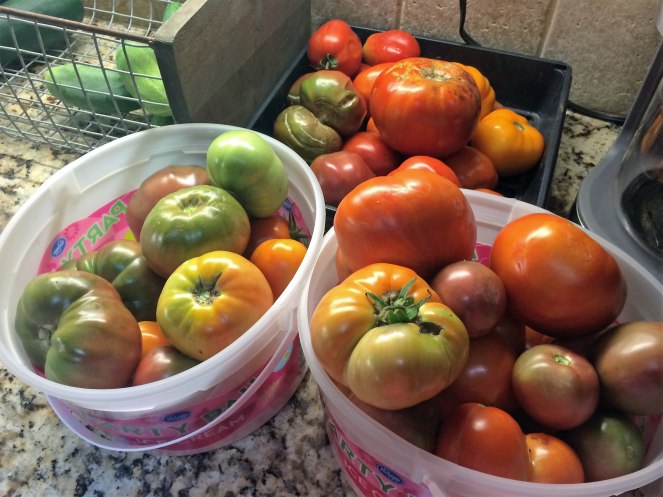 I didn’t have enough time to can them

For the each of the seven days leading up to the trip, Scott asked, “What are you going to do with those tomatoes?”

Then, his questioning became relentless until I decided to hide them in the garage refrigerator. Once the questions turned from tomatoes to departure times, I knew my  ‘maters were safe until we returned home.

After an awesome week with my family, parents and siblings and their families the tomato problem was still there when we got home. I did what every good vegetable hoarder wife would do. I lied about their existence until the evidence became smelly. I’d planned the entire time to put what I couldn’t eat into my compost. 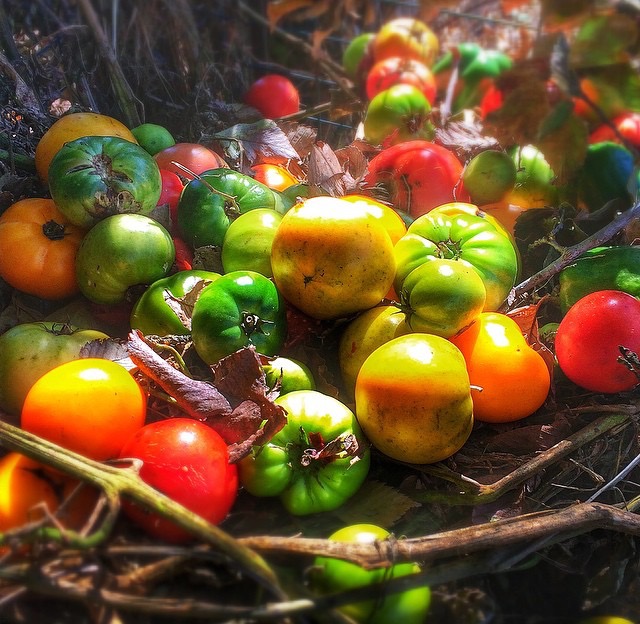 When I couldn’t find the tomatoes for environmentally conscious disposal, I suspected foul play.

“Honey, did you do something with the tomatoes in the fridge?”

He took a couple of steps back, “What fridge?”

He looked puzzled for only a minute, and then his face gave away the crime.

“Did you at least throw them in the compost?”

“They were SMELLING! They were LEAKING! Why did you plant so many tomatoes??”

He spent the next few minutes spewing the anti-logic of planting thirteen bushes for a family who DOES NOT EAT tomatoes. He suggested that I tear up the entire garden and never plant another *($)%($$ tomato seed again. Then he launched into my vegetable hoarding tendencies and threw in a few barbs about the messy garden shed and weedy front bed.

His baby blues burrowed into mine, “Next year. ZERO tomatoes. In fact, why plant any vegetables at all? We can buy them at the store. You should put your whole garden to flowers.”

In my best (feigned) sheepish voice, I conceded, “You’re probably right. I’ll convert the vegetable space to a cottage garden next spring.” Then, I walked away pouting until I was around the corner.

There is only one thing I hoard more than vegetables.

My greatest strength? Maybe I am a Restorative after all 😉 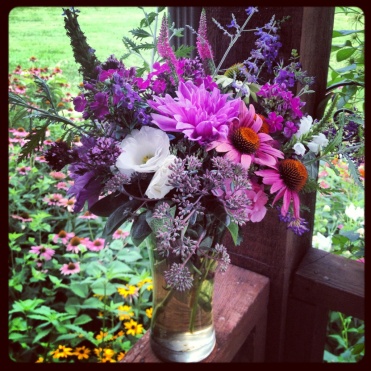 75 thoughts on “Attack of the (marriage) Killer Tomatoes”