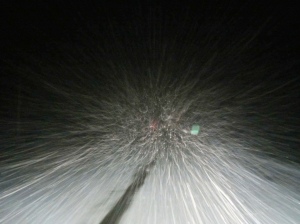 Damn weather – I cursed as I drove my tractor-trailer into yet another snowstorm, seven in seven days. A break would be nice. Now that darkness had descended, the blowing snow screaming horizontal in the wind drew the heat from the windshield so fast that even with the defroster on full, two circulation fans pointed at the windshield, and heated windshield wipers, the ice was still building up too quickly. I snapped down the driver’s air-powered side window, the frozen blast hitting the side of my head like a sledgehammer, snow swirling viciously into the cab. Leaning forward in the seat, I reached around the door frame, caught the windshield wiper as it changed direction at the edge of the glass and gave it a big jerk outwards – the subsequent bang as it reconnected with the glass shook the ice off temporarily so it could continue to at least pretend to clear the windshield.

As the side window clunked back into place at the push of a button, the CB crackled:

“Hey Eastbound! Where ya headed tonight?”

A set of headlights had come up quickly behind me – some idiot driving way too fast for conditions – and there was only one road across Newfoundland and one major city at the far end. My destination was never a question here. I’d driven this road hundreds of times and had learned to respect it – whiteouts were common with drifting snow and ice invisible on the road until it was too late.

Yeah and you are following too close and driving too fast and are clueless.

“About normal for this time of year here.”

“Oh yeah? Well, I’ll tell you I’m from Illinois, and we get so much snow there that they put markers on the side of the highway that stand about 6 feet high with reflective tops so we can see the edge of the road when the snow is piled high. Makes this look pretty tame.”

He really hadn’t seen anything yet and was way too cocky to be safe. The previous year I had spent over a week in a service station in one storm when the road was closed because of 120 inches of snow.

We were passing the Gander International Airport on our left, but there was no indication in the dark as their landing lights were out – no flights expected in the storm. This airport sat on the top of a small elevation, and the road went past the end and below the level of the runways. We were actually passing the very end of a runway not currently in use, and the buildings and lights were out of sight, obscured by the difference in elevation.  – the runway was about 40 feet above and to the left. So that incoming small planes following visual flight rules did not come in at tree top-level and run into the end of the runway, there was a set of what appeared to be light poles flanking the road but which were about 60 feet high. Each pole was wrapped in a red retro-reflective applique for about 10 feet down from the top. Also on the top, but unseen when not in use, were special warning lights indicating that the runway was elevated.

There were 5 of these towering wooden poles along each side of the road where I knew the invisible runway started high above us. Just as Mr. Illinois was done bragging about the 6-foot highway markers in his home state, we came to the 60-foot poles –  to the unknowing, apparently in the middle of nowhere.

“In fact we get a lot of snow here too by times. See those 60-foot poles there with the reflective tops? That’s what they are for – so we can find the sides of the road when the snowbanks are piled high.”

Bwahaha! The timing could not have been better – it was God-given, I swear – all I did was continue his thought.

There was complete radio silence, and I saw the following headlights back off to a respectful and safe distance in the snow. He trailed behind, behaving himself until the next restaurant where he stopped. It was a nice quiet ride after that as the wind abated and I giggled the remaining 200 miles to St, John’s.

What can I say about Paul? We know him as the kind soul who reads everything we write, and then shares his compassionate and wise words. Since the beginning, I’ve been poking at him to share more about his years as a truck driver. There are many layers to this wonderful man, and I’m so honored he shared one of those stories with us today.

I also asked Paul to give us an extended biography so that we could learn more about the man who graces our pages with his smile and wisdom. He doesn’t keep a personal blog, but if you would like to read more, you can find him at Cordelia’s place.

In my late 50’s I’m still trying to decide what I want to be if I grow up. There is a psychology theory that there are two kinds of people: 1) those who know early in life what they will do and proceed in a straight line and 2) those who wander from place to place and profession to profession collecting experiences to use later in life. I am definitely of the second type. When Michelle asked me to write a short bio, I realized I had never done that before.

I’ve spent a lot of years in transportation and often tell trucking stories. I’ve done many management jobs as well, including owning my own company, transportation manager, project manager, business analyst, operations manager, etc. Oddly enough my life seems to express itself in cycles. I truly enjoy driving professionally (and casually) and now and then I will move into a more white-collar job in management and then after a few years, back to driving again. Usually there is an education component to these driving hiatuses and I have accumulated a number of university degrees and countless specialized courses in such a diverse range of interests as training adult educators, nuclear safety, operating an experimental nuclear reactor, defensive driving, French, computer programming, IT Management, teaching, Highway Safety, etc. Because of health issues I am currently and likely permanently on disability pension. This has given me the opportunity to focus on writing – an endeavor that I have always enjoyed but seldom had the time to pursue. A new cycle has begun.

Paul – thank you again for sharing your highway with us.

Life is a Highway: Where is the most awesome place you’ve ever visited or lived?

In what ways has your life’s journey not gone according to plan? Where are your roots? Have how you handled the following: crossroads, stop signs, one-way streets, wrong turns, hidden treasure. Tell us where you’ve been or where you want to go.