Look at this nice note Mark Bialczak sent me right before Game 1 of the World Series:

“Good luck tonight and beyond, my Royals loving friend!
Before the first pitch, I propose a friendly wager.
The loser writes a guest post for the winner’s blog: Why I still love my baseball team and will forever, complete with a selfie in Mets or Royals gear. To be delivered as soon as possible after the deciding game. Can also be posted on the writer’s blog.
Enjoy the games, Michelle.”

I opened the e-mail moments after Alcides Escobar hit an inside-the-park home run on the first pitch. Of course, I didn’t rub it in…not too much 😉

And, I totally accepted the wager.

It’s difficult to be on the losing end of a great championship series, so please be kind to my wonderful Mets friend. Show him some love, visit his blog, and give him a big, virtual hug for being such a great sport.

My side of the story coming soon. Thank you to Mark for providing today’s fantastic content. 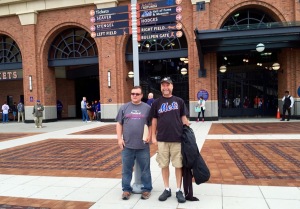 Against the Cubs, my Mets looked so sweet. They swept to the pennant with four victories so crisp and professional, full of Daniel Murphy homers and young-buck starting pitching gems from de Grom and Syndergaard and Harvey and perfect closer work by Familia. They looked like a well-oiled DeLorean. Hell, the final win in that series even came on Back to the Future Day, to taunt Cubs fans who’d lived with the headline “Cubs Win Series” in that legendary movie even more.

But then the World Series, capital S, and my Mets turned into a clunker. Murphy did not hit a homer and started missing ground balls. Jacob, Noah and Matt, with Steven Matz thrown in to complete the vaunted starting four, beat the Kansas City Royals once in five tries. Big finisher Jeurys was treated like the unpopular cousin, blowing two saves.

Congratulations, Michelle. I have to bow to your squad. Your Royals nagged in my ears and gnawed in my brain like a leaky faucet for the first six innings the first two and last two games. And then they cascaded over my body and soul thereafter.

The best team won. Your guys. All of them. I will admit it.

Yet will I stop loving my Mets?

This has been going on far too long for another World Series defeat to dampen my enthusiasm.

In 53 years, my Mets are now 2-3 in World Series play. We beat the Orioles in that magically Amazing breakthrough year of 1969 and the Red Sox in the Buckner-error-miracle comeback series of 1986. We lost to the Athletics in the Gotta’ Believe year of 1973 and the Yanks in the Subway Series of 2000.

If you notice, we don’t get to that last series too often. And yet I root. And sweat. And swear. And hope.

It’s in my blood. My father was a Dodgers fan when he was a kid growing up in Brooklyn. I was born in 1957, when my dad was 20. They Dodgers left Ebbets Field for the sun and spotlight of LA in 1958. The New York Metropolitans were started in 1962 as an expansion team to take the place of the Dodgers and New York Giants, who left the Polo Grounds and began play in San Francisco.

He took me to games in Shea Stadium. I remember riding the Long Island Railroad when he didn’t feel like fighting the traffic on the Long Island Expressway after we’d moved to the burbs, and how we’d walk off the train ramp with all the Mets fans wearing Mets gear and talking Mets talk.

Most years they were losers. But they were our losers. Ron Swoboda, Rocky they called him, was among my first favorites, for his swashbuckling ways. He was there for that first World Series wins, made a stretched-full diving catch to save a game. In my teen years, when I attended the University of Maryland in College Park, I discovered that Rocky had been a Terp before being drafted by the Mets, and that made me smile.

We’d watch all the games at home, over-the-air on the console TV, WOR-9, with Lindsay Nelson, Bob Murphy and Hall-of-Fame home run hitter Ralph Kiner calling all the action. I can close my eyes and hear their voices right this second. Lindsay wore the colorful sports jackets. Bob would yell “Look out!” when a pitcher threw too close to a batter. Ralph, now he was the smart one, but sometimes his tongue would get tangled. He became famous for introducing his post-game show one night this way: “Welcome to ‘Kiner’s Korner,’ and I’m Ralph Korner.’ ” He continued to broadcast a few games a season well into his 80s until passing away several years ago. RIP, Ralph.

I’ll continue rooting because of our winning legacy, too. Tom Seaver, our first Hall of Fame player, took us to that 1969 World Series, and was one of the best pitchers I ever saw live, still. When the front-office yahoos traded him to the Reds, I cried.

Dwight “Doc” Gooden was the young pitching stud who got us over the hump in 1986, and Keith Hernandez was the main guy in the lineup. The stellar first baseman we swiped from the Cardinals for passable pitcher Neil Allen is now part of our cable broadcasting crew, along with 1986 teammate, wonderful pitcher and just as good broadcaster Ron Darling, and a smart and dry-witted pro Gary Cohen. I watch the games and revel in their knowledge and chemistry.

Catcher Mike Piazza was the main man in 2000, and we got him from the Miami Marlins. But they only had him for a matter of a week of so after obtaining him from the Dodgers. There was something right about that. Piazza has gained more and more votes in Hall of Fame balloting each year since becoming eligible. Next year could be his turn.

So, Michelle, there you have it.

Now, GM Sandy Alderson, get ready for a busy offseason. Yeonis Cespedes will be too rich for our budget. He was a good free agent rental from the Tigers. We wouldn’t have made it to the postseason without him. Murphy, now, he’s a lifer Met. Will his Series stink job devalue him back into our plans? Get him if he’ll take a cut-rate offer to stay a Met. Jonathon Niese looked really good as our first lefty out of the bullpen. Now get him some more help bridging the way to Familia.

We played on Nov. 2. There’s only four months until pitchers and catchers report.

Remember, the Royals lost the 2014 World Series, and look what they did to us. All those fans you saw screaming and yelling at Citi Field this year won’t forget. 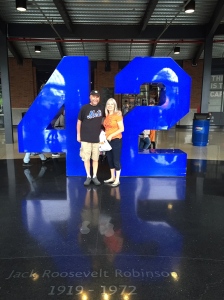 Thank you again for being such a great sport and paying off your bet so promptly. Mark is a freelance writer and blogs here. In addition to being an avid baseball fan, he’s also dedicated to his dear wife Karen and their pooch, Dogamus Pyle.

Oh, and one last thing. Guess who the Royals play for their home opener April 4, 2016? hehehehehe….