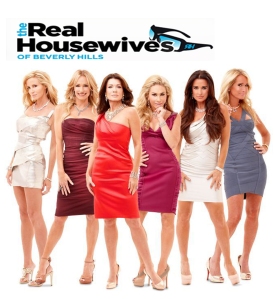 Even though I watch very little TV, I don’t judge the people who do. It’s entertaining, escapist and fun. The problem is, I can’t sit still for anything much longer than a commercial. When I’m not slaving at my day job, even a beloved football game plays second fiddle to laundry, yard work and kiddos. But today I compromised with my husband and bestie that I’d try to get some rest so that the nasty cold that has hijacked my normally healthy body would be gone before Christmas.  As soon as my “to do” list became my “to done” list, I sat my butt on the couch for some mindless TV.

I was on my 3rd straight episode of the “Real Housewives of Beverly Hills” when I texted Kelsey (the bestie) to make sure I had my stories (and plastic surgeries) straight. It was like watching a collagen infused, silicon-wrapped train wreck and I couldn’t look away.

Me: I’m watching Real Housewives of BH and I may not move off this couch. I’m also filling up an online shopping cart of loot from Athleta
Kels: I’m sooo proud. I think I may love you even more now if that’s possible
Me: Back at ya!
Kels: Those girls are SUCH evil $*(%. But fun to watch.
Me: I know! I can’t stop!
Kels: They are mean hateful %()^#. They make me look like Mother Teresa
Me: You are ALREADY like Mother Teresa. She was such a cool chic
Kelsey: Really?
Me: Yep! She was smart, sweet and had a clever sense of humor

Light bulb! Writer’s block temporarily averted and a new subject to write about.

Consider this my first installment in, “People who inspire me.” I’m still building my list, but Erma Bombeck and Benji Franklin are up near the top along with this cool gal.

Founder of a religious order and a Nobel laureate, Mother Teresa lived as she died, in Calcutta tending to those in need. She communicated to others through tireless service, prayer and in her own very personal, vulnerable writings that I’ve only begun to read Come Be My Light: The Private Writings of the Saint of Calcutta

Even though she had an aura and charisma that drew the most powerful and public people to her, she remained humble and grounded by her imperfect human existence. In my childhood, I loved her for her perfection and dedication to God. In my adulthood, I admired her for her less than perfect struggles with doubt, darkness and faith.

“If I ever become a Saint–I will surely be one of “darkness.” I will continually be absent from Heaven–to light the light of those in darkness on earth.”
–Mother Teresa of Calcutta

Admittedly, among other areas, I fall short in following her example of  “tireless service.” Even though I’ve vigorously signed up  for volunteer events, my own weak emotions and overactive empathy often get the best of me. Many times, it’s so bad that I cancel and shrink away in shame leaving the stronger souls to pick up my slack. The life situations of the people I see (and serve) at the Rescue Mission make me feel so bad that I often ignore the e-mails calling for last-minute volunteers.

“Don’t look for big things, just do small things with great love…the smaller the thing, the greater must be our love.”

Several weeks ago, when I was combatting my own demons, a friend told me about the saint’s battle, something she called, “The Dark Night of the Soul.” Mother Teresa revealed her insecurities and wrestling matches with faith as well as the darkness and pain in her life. Her many critics may have called her “a fake and a liar” but I only see her as vulnerable, authentic….and human.  Even now, I’m a little hesitant to put Mother Teresa and the Housewives on the same page, but I know that Teresa would have embraced those poor souls just like she embraced everyone else.

Long story short, at the end my text session with Kelsey (and before we could be interrupted by a Housewife cat fight), she shared with me a favorite writing that has been long credited to Mother Teresa. It’s simple, beautiful and relevant no matter what your religious or spiritual beliefs might be. As we come out of a challenging year and head into another one, I think of her words as we all face private battles and uncertainties moving forward.

People are often unreasonable, irrational, and self-centered.
Forgive them anyway.
If you are kind, people may accuse you of selfish, ulterior motives.  Be kind anyway.
If you are successful, you will win some unfaithful friends and some genuine enemies.  Succeed anyway.
If you are honest and sincere people may deceive you.  Be honest and sincere anyway.
What you spend years creating, others could destroy overnight.  Create anyway.
If you find serenity and happiness, some may be jealous.  Be happy anyway.
The good you do today, will often be forgotten.  Do good anyway.
Give the best you have, and it will never be enough.  Give your best anyway.
In the final analysis, it is between you and God.  It was never between you and them anyway.

Thank you, dear reader, for this little detour into my intensely private spiritual side. It don’t openly reveal it often, but it’s always there and part of who I am…vulnerable, authentic and imperfectly human like my favorite saint.

Many blessings to you and yours during this holiday season.